Naomi Klien seems radical to many in the US, she's just from Canada


"I actually had a child five months ago in a public hospital and never got a bill. Seems pretty amazing."


More and more followers. Ran an advertising campaign for Obama in swing states in what seemed like persuadable demographics with 98,000 favorable impressions the last week.

Just wrote a comment on Ace of Spades blog where he is shocked, shocked that The Romney campaign is lying and saying their untested GOTV day of the election campaign didn't totally fail.

Imagine that, a campaign known for unprecedented lying is still lying. Meanwhile I had the loosest* connection to the Obama campaign and received email and Facebook messages election day about contacting particular friends on Facebook in battleground states and see if they had voted yet.
* I was running my own Facebook adv. impression campaign in toss-up states to likely women persuadable voters using the photo of Obama hugging a women standing beside Christie (Real Bipartisanship) or the granddaughter of Ike and her intelligent reasons she couldn't vote Republican this year. Don't know if I motivated anyone to get out and vote but 98,000 favorable impressions couldn't hurt.
Those of us who listened, watched and read from the reality based community were not surprised at all by the election results.
Far from the mainstream media being biased it was the "Fair and Balanced" media that were severely biased and did not inform their viewers but kept them riled up with propaganda instead of facts.
If you were surprised, it seems you were very surprised, please reflect on your choice of media and add some balance and perhaps you won't be fooled again.
We actually would like rational opponents with real facts to debate how to solve problems, not those we have to contact when the real world finally unmistakably intrudes to just say "We told you so."

Go to my Facebook page for frequent news and comments for liberals and anti-authoritarians.

Click Google or where it asks or enter "I want to vote" to get where you are supposed to vote. 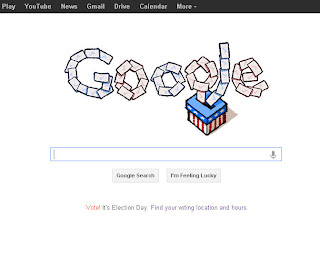 
For most polls this election has a simple story. Obama lead from the beginning, had a bad first debate where suddenly Romney seemed credible and they were tied, and Obama has been inching and trying to claw his way back up and now leads by less then a point.

This is shown by all nearly all polls. I am only going to exclude two pollsters out of dozens to show this. 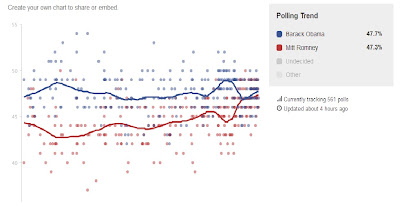 There are two pollsters who have strong Republican leanings and were not very accurate in the 2008 and 2010 elections compared to others. Rasmussen is known as a Republican lean poll and is the only one who excludes cell phones and weights its polls according to what it thinks the turnout by party will be. Gallup has a long history but has become very conservative and has been criticized for recently overweighting the South on national polls, some wrong methodology, and using a likely voter model that induces big swings that makes sure that Gallup polls are often talked about. Unfortunately because of their conservative bias and frequency these are the pollsters Republicans and conservatives almost exclusively use, when they aren't criticizing all polls and not recognizing the science behind polling.

Here is the conservative poll story using just Gallup and Rasmussen. The polls varied often after Romney got the nomination with both sides having leads until early summer where Obama got the lead and kept it until the first debate. After the first debate Romney took the lead has been increasing his lead almost daily until it is now four points. 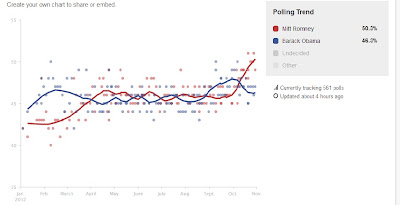 Because of their methodologies and recent history I go with the average of all the other pollsters and think the Gallup and Rasmussen polls have it wrong.

Surprise! A Romney adviser is lying about ObamaCare

Run Everybody! Avik Roy is Coming!

Someone paid by the Romney campaign promotes himself as a healthcare expert and goes on popular website to write articles about how expensive Obama is going to make insurance.  Just carefully reading his latest articles, coincidentally aimed at very close swing states, should reveal to anyone his blatant lies.

This link at a non-profit goes into a bit more detail on how Avik Roy transforms a 1 to 3% cost increase into a 55 to 85% increase.

Please hurry and let Romney's Lying Express be over.