Another Look at SR144


I've been looking at the Redmond and Legler results again.  That was one we Democrats feel should not have gotten away.
Here is another graphical look at it that highlights the core features of the district - the Fairmont Parkway Republican area, the Democratic Houston and the toss-up areas in Pasadena away from Fairmont Parkway. 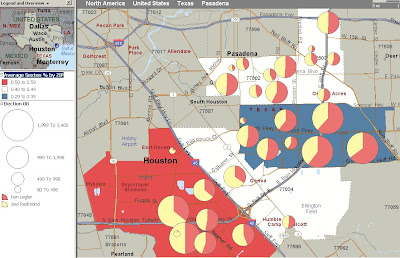 The 2008 results are the pie charts placed on the center of the precincts and the background is the 2006 Janette Sexton results averaged by zip code. The size of the pies reflect the number of voters in the precinct. Turnout and Democratic results could be better in the North Pasadena precincts with a bit more organization.

Here is a similar graphical map for the Presidential vote in 2008.

Although these graphs are statistically accurate, they do not include the excellent performance of other Republicans, Redmond's popularuty and name id, and that this was an open seat. After winning by about 200 votes, barely over 50%, Talton went on to garner 60% in the next cycle, so the incumbency advantage is huge in this area. When Legler is on the ballot again in 2010, he will do just as well as the others because he will have no popular opponent and he will have the incumbency advantage.