This is a bad deal, a very bad deal. 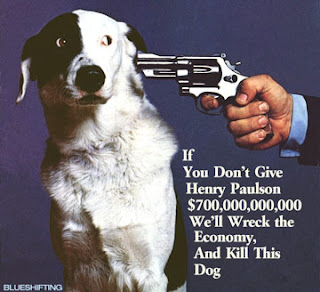 It seems all too likely that a “fair price” for mortgage-related assets will still leave much of the financial sector in trouble. And there’s nothing at all in the draft that says what happens next; although I do notice that there’s nothing in the plan requiring Treasury to pay a fair market price. So is the plan to pay premium prices to the most troubled institutions? Or is the hope that restoring liquidity will magically make the problem go away?

Here’s the thing: historically, financial system rescues have involved seizing the troubled institutions and guaranteeing their debts; only after that did the government try to repackage and sell their assets. The feds took over S&Ls first, protecting their depositors, then transferred their bad assets to the RTC. The Swedes took over troubled banks, again protecting their depositors, before transferring their assets to their equivalent institutions.

The Treasury plan, by contrast, looks like an attempt to restore confidence in the financial system — that is, convince creditors of troubled institutions that everything’s OK — simply by buying assets off these institutions. This will only work if the prices Treasury pays are much higher than current market prices; that, in turn, can only be true either if this is mainly a liquidity problem — which seems doubtful — or if Treasury is going to be paying a huge premium, in effect throwing taxpayers’ money at the financial world.

Josh says taxpayers get nothing at a premium price:

I'm quite convinced that some drastic action needs to be taken to avoid a cascading and debilitating series of crises. But the more I look at this plan, the more wrongheaded it seems. But if I'm understanding this deal, the taxpayers are going to pony up close to a trillion dollars to take bad debts off the hands of financial institutions who were foolish enough to make the deals in the first place. And in exchange, I think the tax payers get nothing?

I would guess that this has to be one of the biggest peacetime transfers of power from Congress to the Administration in history. (Anyone know?). Certainly one of the most concise.

The Treasury Secretary can buy broadly defined assets, on any terms he wants, he can hire anyone he wants to do it and can appoint private sector companies as financial deputies of the US government. And he can write whatever regulation he thinks are needed.

This [para]graph really stands out:

Decisions by the Secretary pursuant to the authority of this Act are non-reviewable and committed to agency discretion, and may not be reviewed by any court of law or any administrative agency.

So, for the next three months, and then an additional six months after that, the Treasury Secretary can do anything he deems appropriate without anybody anywhere looking it over.

Larisa Alexandrovna writes THIS LOOKS LIKE A FASCIST TAKEOVER!!!

No time needs to be wasted on hearings as we already now have in writing, formally as presented to Congress, the intentions of this administration to nullify Congressional powers permanently, to alter Judicial powers permanently, and to openly steal public funds using as blackmail the total collapse of the US economy if these powers are not handed over. You do see how this is blackmail, do you not? You do see how this is a manufactured crisis precisely designed to be used as blackmail, do you not?

The other option, the one I have long prayed we would never need to even consider, is a total revolution. But, If Congress won't act in its own self-defense, in the defense of democracy, in defense of us - the people who have elected them to protect us from this very danger - then what is left for us to do? I don't want to see it come down to this, but I fear that it will.

The top financiers from Wall Street who wrote this bill say no compromises to allow oversight or protect consumers. Brad DeLong says this bill makes the next Treasury Secretary an economic Czar.

The Paulson RTC will buy toxic assets at inflated prices thereby creating a charitable institution that provides welfare to the rich—at the taxpayers’ expense. If this subsidy is large enough, it will succeed in stopping the crisis. But, again, at what price? The answer: Billions of dollars in taxpayer money and, even worse, the violation of the fundamental capitalist principle that she who reaps the gains also bears the losses....

Wall Street Journal - Top Lobbyists pressure Congress for a quick deal now. (This may have been pulled from the WSJ.)

With truly extraordinary speed, opinion has swung behind the radical idea that the government should commit hundreds of billions in taxpayer money to purchasing dud loans from banks that aren't actually insolvent. As recently as a week ago, no public official had even mentioned this option. Now the Treasury, the Fed and congressional leaders are promising its enactment within days. The scheme has gone from invisibility to inevitability in the blink of an eye. This is extremely dangerous.

The plan is being marketed under false pretenses.

The Bush administration sought unchecked power from Congress to buy $700 billion in bad mortgage investments from financial companies in what would be an unprecedented government intrusion into the markets.

Democrats and Republicans faced off Sunday over the US government's landmark request for 700 billion dollars to bail out financial institutions as Democratic lawmakers insisted that ordinary homeowners be offered relief, too.

Every reader of this blog needs to wake up Monday and phone their Congressman and Senator about the frankly silly bailout proposal. We need serious solutions to an existential crisis, and the Bush administration offers up clown shoes. No to giving one appointed cabinet officer practically the entire federal budget without any chance of oversight. No to punishing ordinary people with punitive loans and taxes that will amount to over $5,000 for every taxpaying American* while bad actors in Wall Street get rewarded beyond their wildest fantasies. This proposal must be scrapped, and anybody who still serves finance lobbyists needs to sit down in shame, and then we can talk about what to do. Be polite but firm.

The media is starting to wake up. LA Times - The White House submits a proposal to Congress seeking unprecedented authority with no oversight.