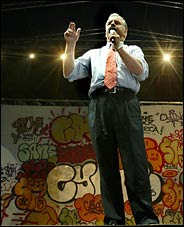 The staggering, seemingly spontaneous crowds turning up to meet him — about 10,000 in Seattle on Sunday and a similar number in Bryant Park in Manhattan last night — are unheard of in the days of the race when most candidates concentrate on the early-voting states of Iowa and New Hampshire and would seem formidable even in October 2004.

Yesterday morning, the campaign took another audacious step, saying that it would broadcast television advertisements in six new states beginning on Friday, and that it expected to raise $10.3 million in the three months ending Sept. 30 — more than any other Democrat in a similar period save for President Bill Clinton in 1995.

"We have to be in the president's face to win," Dr. Dean, 54, said aboard the ancient Boeing 737 his staff dubbed the Grassroots Express.

"When this president talks, sometimes the opposite of what he says is really the truth," he said yesterday in Chicago, between speaking to a tepid union convention and being embraced by about 1,500 supporters atop Navy Pier, "and if we don't call him on it, we can't win."