Molly and Barack and David 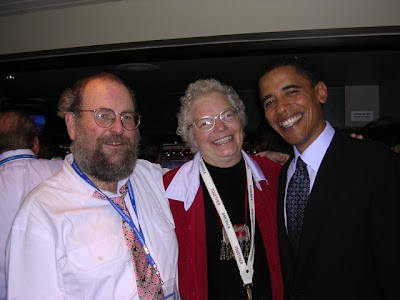 From the Texas Observer blog.

“You know,” she said after we met him. “That young man could be President some day.”

“What?” I said. “Are you crazy? Not in our lifetimes.” We both knew what I meant. After all, that young man was black. And she and I had both grown up white and liberal in a segregated Houston with “Colored” restrooms, “Whites Only” water fountains, and lily-white lunch counters. In the mid-1960s we had both worked on The Houston Chronicle, where there were a grand total of two black faces in the newsroom, and where we had to plead with and cajole our editors to let us do a long story on poverty in the city. There wasn’t much coverage of the black community back then that didn’t involve crime.

“Yes, he should run. He’s the only Democrat with any ‘Elvis’ to him.”

"Ladies and gentlemen, Barack Obama is our new president. And I think I speak for most Americans when I say, anybody mind if he starts a little early?" --David Letterman
Posted by Gary at 11/08/2008