A historic moment, what a proud day to be an American after eight dismal years, but I had a very long day working the election without enough sleep in a busy precinct. 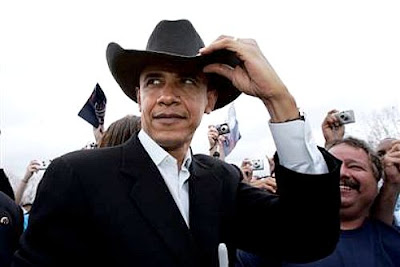 Many Democratic local and state disappointments with some successes. Great national Democratic successes against an increasingly irrational loud Right.

Based on my precinct, Sarah Palin and Barack Obama energized bases that usually do not bother to vote. We had a huge number of not registered people wanting to vote and a very high percentage of "statement of residence required." In the suburban Texas elections that Democrats were hoping to make gains in the state house, the energized social conservatives beat back many good candidates this election.

People who have never voted turned out, or tried to turn out in Texas, to vote against that "anti-American, commie, half-frican" and for the "hotty moose hunter." The GOP's restrictions on voter access disenfranchised a number of their biggest supporters.

Some thoughts, I admit to a personal lack of understanding - if Rep. Lampson was likely going to go down to defeat as a Republican-lite in a heavily Republican district why not go down as a fighting Democrat? He disappointed his base without any solid gains in attracting moderate Independents and Republicans.

Very disappointing losses for some Democratic women. No one has worked harder in a hard district to win than Sherrie Matula and the Bay Area New Democrats. I think the energized socially conservative base and Hurricane Ike were a major factor in her loss as well as the lack of a major scandal against the GOP opponent in a heavily Republican area. Joel Redmond probably suffered from the problem I anticipated. Many of the voters he was attracting come election day just push the R. The flyer linking him to liberal minority Democrats also probably shaved off a few points costing him the election. In this area this was not an election for thoughtful voters. Most voters wanted one extreme or the other.

Final thought but one - I am sure that Barack Obama harmed down ballot Texas Democrats less than a Hillary Clinton campaign, which is an issue that has come up in discussions.

Obama being elected is a triumph of liberalism and tolerance over the conservative forces that often dominate America. Savor the moment. I am with my aching feet, a sore back, and eyes that keep closing. At least I am not sour. (BTW, "the most liberal senator" comes only from a publication that rigs that election every four years. Without thinking I can name three Senators more liberal than Barack. Media Matters points out there are TEN.)