Time to Win the War of Ideas--Finally

I had an interesting couple of Democratic meetings recently - the first being sworn in as a precinct chair and the second a blogger and politician lunch organized by Charles Kuffner. 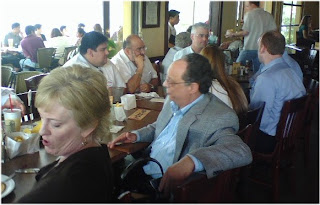 At the lunch I disagreed with a former Republican aide telling Melissa Noriega that her husband should avoid mentioning Bush in his campaign for Senate. I waited a bit and said that in today's campaign style the best thing that could happen would be a video leak of Rick Noreiga telling a small meeting that Bush is a moron who is destroying the combat effectiveness of our military. Even in Texas there is not much support for Mr. 28% and I argued Rick would pick up much more support than he lost. 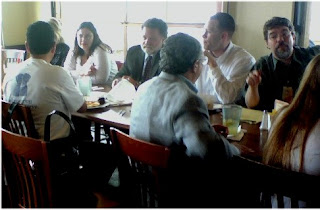 We need fighting Dems who draw contrasts with the failed GOP. (We also need a media which doesn't pander to the GOP slime machine.)

Greg Anrig and Krugman make pretty much my same point. Republicans have become the party of denial and incompetence. Democrats should aggressively attack them on it. The lesson of the last eight years is Democrats lose by avoiding the issues and rolling over and playing nice.

The big thing at the precinct chair meeting was the huge number of new precinct chairs added. One Senate District seemed to have four pages of new chairs. I think by November every precinct might be covered and there is a coordinated campaign being funded to get all the chairs active with a ground GOTV game.

btw, I met with Michael Skelly at a Peace Corps event. Nice person. In my opinion, he seems a shoein to beat Culberson for Congress. He's well-funded and is a green-energy entrepreneur. He will be the Nick Lampson for this election cycle.

Michael Skelly is an exciting race which looks very winnable. The judges for Harris County look very good. Joel Redmond in HR 144, if the campaign ever starts, is very winnable.