Although I have endorsed Barack Obama,

I have a great deal of respect for Hillary Clinton and I have a crush on Chelsea girl. It is time for Chelsea to start thinking of running for office soon or at least taking up with a dirty liberal old man. 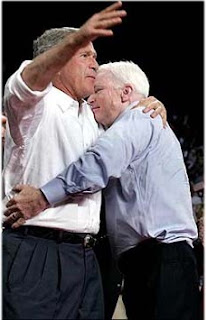 Like many Democrats, I would be happy with a Obama/Clinton ticket and adding Bill Richardson and John Edwards to the cabinet. (Despite the role Bill Richardson played ignoring missing votes in New Mexico in 2004 due to an internal NM Democratic fight, he made up for it by instituting paper ballots in 2006.)

I would hate four years of McBush. A thousand year occupation in Iraq, an angry old man who knows nothing of economics, bad Republican judges - no thank you.

Chelsea did come to see my neighborhood the other day at San Jac College. 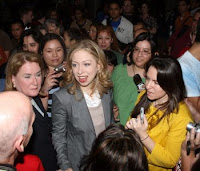 Chelsea Clinton came out to the foyer filled with students and held a question and answer period that lasted nearly an hour.

Last five polls now show Obama surging in Texas - most show ties within the margin of error, however.