How he is doing it in Houston. A fantastic grass roots ground game. 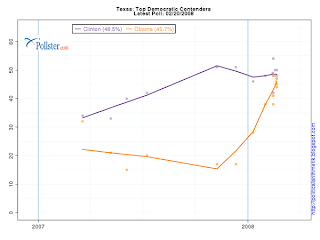 Recalculating the delegate count. The best case for Hillary on March 4 is a tie in delegates awarded. The best case for Obama is that he carries Texas 2-1 after the convention. Matt has the most probable outcome being the tie in delegates on election day which is what I had on the 12th before Obama won Virginia. I still haven't hear how Texas is unlike Virginia aside from a larger Latino vote which makes this competitive for Hillary. I give a slight edge to Obama on primary delegates awarded now and a 2-1 edge in convention delegates.

Is Clinton counting on Latinos to carry her over the top in the general election? She probably loses more conservative votes than she gains following that strategy.