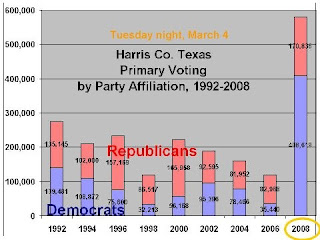 Here was the increase in voting in Harris County. This was sent by Allan R. Jamail.

That understates the increase in people attending the Democratic precinct conventions after the election. I think on average we went from precincts having 1 or 2 attendees to close to 100.

Our Senate District 11 in Harris County convention on March 29 will go from around 140 attendees to well over 1000 - Flyer (PDF). That may be an underestimate if attendence increased more than ten times. This represents part of Houston, part of Pasadena, all of Deer Park and La Porte and some surrounding areas - map-PDF. The main purpose of this convention will be to choose delegates to go to the state convention in Austin. There will be some challenges. There will be some credential problems. There will be resolutions introduced. There will be too many speeches by politicians. We still expect it to conclude in the afternoon and people will retire to the nearest places of refreshment to continue the discussions and get fired up for the November election.

Right now, I know of no serious problems in SD-11. Unlike some other precincts elsewhere in the state where the delegate sheets did not get turned in by Friday or people ran off with the paperwork not liking the results. In my precinct, where Deer Park, Pasadena and La Porte come together on the map (pdf), detailed map, three people signed themselves in as delegates and alternates instead of being voted upon. One delegate who was voted upon did not sign in!? These will be resolved and then the delegates will vote on a series of measures and delegates or will work on committees and listen to too many speeches. My precinct also never officially closed the Tuesday night session and might have to formally do that before anything else.

This area, SD-11, was about 50/50 in terms of Hillary Clinton and Barack Obama supporters. Official primary early vote 48% Hillary to 50% Barack, total vote: 53% Hillary, 46% Barack - corrected. My precinct convention was exactly 44 for Hillary Clinton and 44 for Barack Obama who signed in. That was part of the reason for the delay and neglecting to close the convention. There was a constant recounting of the votes by the two sides. That and I should not have tried to chair the precinct and also close the election voting location. It seemed a good idea at the time with all the new people and candidate partisanship running hot and heavy.

Correction: I mistakenly put only the early vote percentage down at first.

I don't have that by county. I mistakenly put the SD-11 EV.