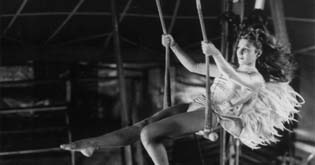 Rumors on the Internet for several days are finally being confirmed in European media. From an email:

A reliable friend in Paris has informed me that there will be a ceremony for Solveig Dommartin on Monday afternoon January 22nd somewhere in Paris. Wim Wenders is organizing this tribute.

Solveig will be buried probably around January 26th in the Vosges, where her grandfather was buried, east of Paris near the border with Germany.

Solveig's mother, named Sylvette Dommartin, confirmed that Solveig was born on May 16, 1961. She was 45 years old. Solveig's father also died at age 45 during the month of January. The information given on IMDB and Wikipedia about Solveig's birth in 1958 is wrong. Solveig leaves behind a daughter named Venus.

There was to have been an autopsy performed on Solveig today in Paris. The results have yet to be announced.

Solveig was in Wim Wender's Until the End of the World and Wings of Desire.

My non-politics notebook
My Games